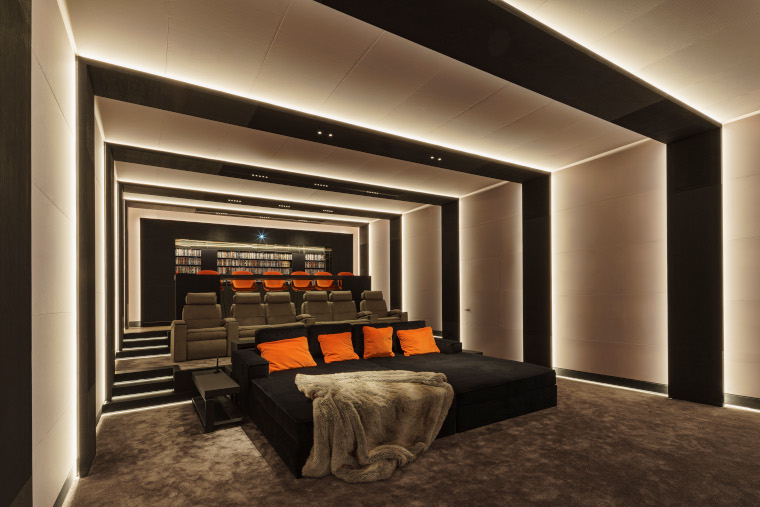 Now, I don’t profess to know that much about the technology involved in creating the perfect home cinema. But luckily there are some expert integrators out there who know exactly how to achieve sophisticated results.

Here are some great projects that were recently featured in the CEDIA Awards. Some of the technical jargon is a little baffling, but I hope this round up gives you an idea of the expertise a professional integrator can call on to provide the perfect sound and vision.

BrownHen was asked by the client to come up with ideas for how a relatively small space in their new home could be transformed into a cinema room.

Despite a modest budget, BrownHen still had to give consideration to all the aspects of the project: AV, lighting, control and comfort.

The client wanted the room to look like any other from the outside, so that when the door opened it came as a complete surprise. It also had to feel intimate when just a couple of people were watching a film, but also support a gathering of up to 10.

The challenge of including 10 seats in such a limited space were discussed with the client and it was decided that other elements could be compromised to achieve this. A front-vented projector was chosen, to allow it to be located close to the back wall. Lens shift was also made use of and ceiling mounted surround channels were used.

For Cinema Lusso creating this striking room during the Covid pandemic proved a real challenge. With UK manufacturing shut, it was impossible to get the triangle design CNC-cut as planned. The lead fabricator had to move in with one of Cinema Lusso’s directors during the build so he could work safely in isolation. This meant that all the triangles were cut by hand on site.

The client wanted the room to be able to comfortably seat six adults plus children. An inset floor cushion was used to increase the capacity for occasional use. Budget didn’t allow for a bespoke screen so Cinema Lusso were limited to off-the-shelf sizes. A 100in screen was chosen, which meant there was little wiggle room with the seat positioning to create the ideal viewing angle.

A high proportion of content watched would have a native 2.4:1 aspect ratio, so aSim2 Domino 4 projector was used, thanks to its compact size, which allowed it to be placed further back in the room. Studio Lusso also customised the remote control with a Batman Button so that the client could comfortably watch the IMAX version of The Dark Knight.

The client gave Consexto a tough assignment – to create a James Bond themed room with a luxurious cinema that could adapt depending on the configuration of the space and the audience.

To achieve a wow factor, in true Bond style, a motorised double door entrance hides the cinema behind a bookshelf. To enter the room you have to move a scale model of an Aston Martin car or say “Moneypenny open door.”

A moving platform changes the configuration of the cinema from three to seven or 11 seats – four seats are hidden under the floor and move when the room is altered. There’s also a hidden bar for the vodka and martini shaker and Aston Martin buttons from the car seats are built-in to the cinema seats and connected to KNX input modules, enabling control of different functions.

Cyberhomes’ client wanted a redesign of their existing media room to watch movies and music videos as well as play games. In the brief, the tech had to support the latest reference quality audio and video formats as the room would also act as somewhere to screen music videos for guests.

Design-wise, the room had to combine the functional look of a studio with a relaxing cinema environment. One of the requests was to include a pair of high-performance front speakers to complement the décor and make them a visual part of the room

The main challenge was to create a synergy between the different elements of the room to create a visual experience with carefully chosen AV and acoustic products but with a relaxing yet funky vibe. A Dolby Atmos 5.2.4 speaker configuration was installed and Meridian Audio was chosen, as it met with the client’s expectations for high resolution audio and iconic speaker designs. A pair of DSP7200SE speakers sit either side of a large, acoustically transparent, projector screen and a sonically-matched DSP5000HCSE centre speaker was fitted directly behind the screen.

The lighting design included adding an ambient glow to the acoustic panels and projector screen, with accent downlights highlighting individual room features such as the front floor-standing speakers and corner bass traps.

Dark Side of The Room was the integrator for this spectacular, purpose-built home cinema for watching movies and sport as well as playing computer games. The client brief was for a dream entertainment area, but as the original concrete room had high, sloped ceilings, an internal room was built to allow the system to be fully hidden. Six different types of acoustic panels have been used throughout the space to optimise the audio. Sound quality has been achieved through a Divatech MACH 5 acoustic wall consisting of 350kg of speakers on the front wall and 14 speakers spread across the walls and ceiling.

The cinematic visual experience is delivered through a Sony 4K projector, which produces images with extraordinary clarity and colour combined with an impressive 4.5 m-wide screen.

The owner requested three rows of seating: couches for relaxed movie viewing; luxurious armchairs for films and games; and a bar with stools for watching sports. The viewing experienced is further enhanced through motion actuators, fitted to the cinema seats and beds, which respond realistically to bass noise.