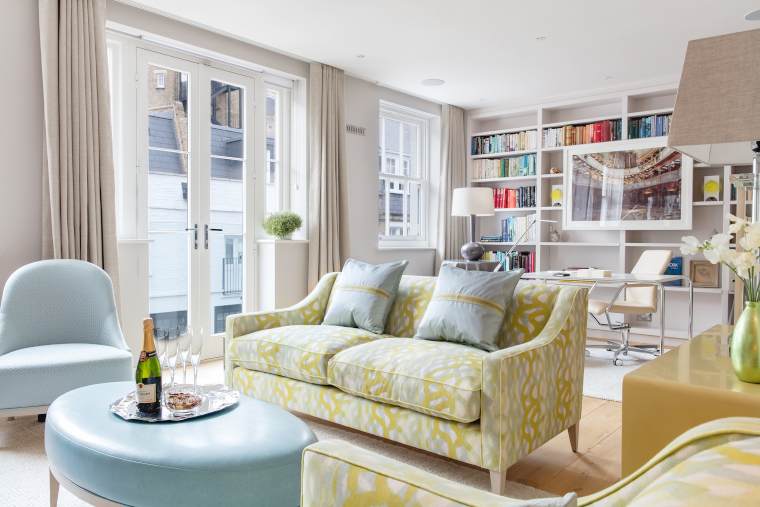 Sarah Wodehouse, of Decibel Designs, personalised a rented mews house in Knightsbridge using the clients’ art and bespoke furniture that can move with them to their next home

Can you tell me a bit about the property? A mews house in Knightsbridge, recently refurbished by a developer.  Our clients chose to rent it unfurnished.

Who was your client for this project what was their brief? This was the clients’ second home, a city residence that had to accommodate their university aged children on and off as well as sundry other friends and relatives. It was also a stop-gap between their previous property, which was a little too small for so many visitors, and their next, more permanent London abode.

The brief was to squash in as many beds, which were as large as possible, into some awkward spaces even if they were difficult to get around.

Designwise, a ‘fresh’ feel was called for.  This was partly inspired by the developer’s lighting and finishes which we had to work with and partly as a contrast to the clients’ country home.

What was your starting point for the interior? Selecting a palette of colours and a ‘fresh’ fabric that would work within the confines of the existing finishes and that would sit comfortably in a future London or country home.  Christopher Farr’s Fathom in Sage with which we covered the sofa, armchair and a headboard on the first floor fitted the bill.  Yves Delorme’s Voguer bedlinen (now discontinued) worked well with this fabric for both guest bedrooms on this level, one of them opening out onto the drawing doom.

Did you select the art, or is it the client’s own? The art is mostly the client’s own but we weren’t compelled to hang anything that didn’t work in the space.  We had been responsible for purchasing some of the pictures for the client’s previous London home and now we reframed and adapted others.  For example, the power station reflected in the cloakroom mirror has been reframed for this site and the photograph, just visible above the coat rail, was in a terrible condition but was special to the client so we managed to have the original reprocessed and reprinted as well as reframed.

The client also purchased several pictures with this property in mind including the quadtych on the stairs and those at each end of the drawing room.

Did you specify any bespoke pieces for the project? Yes, quite a lot. In particular we specified the pale grey stained oak finish which was matched by several different furniture suppliers and used for the show wood on the upholstery in order to harmonise many of the new pieces. We also designed the upholstered laundry bin whose detailing reflects that of a couple of other pieces specified.

The client had requested that the headboards shouldn’t be too high or too showy so they were all bespoke.

We also had to design and make the bedlinen for the smallest guest bedroom as the 4’ bed is an unusual size and the required superking pillowcases were not available in the Yves Delorme pattern.  During this process we added some edge details to reflect those elsewhere in the house.

How much of the furniture will be re-used in their next home? As much as possible!  We commissioned several small pairs of things which could work together in the same room in future but are currently used separately, including chests of drawers and the writing table below the wall hung television in the master bedroom whose pair is in use as a hall table.

How challenging was it to devise a scheme that worked with the existing finishes? Since most of the finishes were neutral, initially it wasn’t too difficult.  However, when we got to the top floor, the main finishes changed from greys to dark brown in the dressing room and master bathroom so it was a challenge to continue the same fresh feeling. In the end we didn’t fight it and repeated some darker blues on the upholstered laundry bin in the dressing room and on the sofa and towels in the master bathroom which are then picked up in the upholstery and bed valance fabric used in the master bedroom.

The acoustics and some of the lighting were a bigger challenge so we did remove shutters and install curtains and a rug into the dining area to deal with the sound and also removed a couple of intrusive light fittings so that bedside lamps could replace them and a landing picture could be properly lit.  All these items have to be returned to their original state when the clients leave the property so we were very conscious of keeping these interventions to a minimum.

What is your favourite design feature? Hmmm… this is hard as I love (and will use again) some of the details already mentioned, but the first floor drawing room is a particularly successful space, blessed with lovely daylight.  You enter opposite the middle set of French windows and each end is distinct, defined by a pair of thick, neutral floor rugs – one end for seating and entertaining and the other for writing at the Thonet desk and gazing outside whilst swinging in the chair!

Sarah Wodehouse Decibel Designs is a member of the BIID, see more of her work here