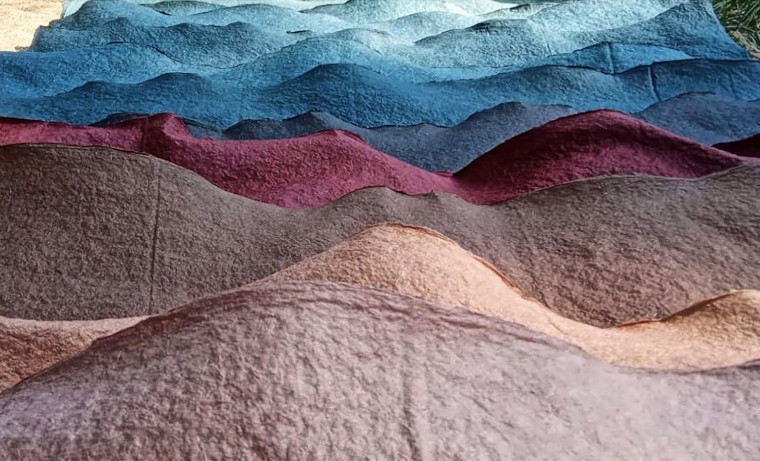 Revolutionary alternative materials made from volcanic ash, pineapple fibre and even cow dung are making bold claims in terms of their versatility and environmental impact says guest contributor Adrienne Wyper

Traditional materials like wood, brick and stone have been around for millennia, but as thinking changes, environmental concerns mount and technology evolves, a new generation of innovative products is emerging with some very appealing – and amazing – properties, from sustainability to saving energy, and from some rather surprising sources.

Is there a more versatile plant than hemp? First used for fibre around 50,0000 years ago, its uses encompass rope, textiles, paper, bioplastics, biofuel – and even a milk alternative. Yet another application is an alternative to conventional concrete, which has been used since Roman times.

To make hempcrete, the aggregate in concrete – usually gravel or crushed stone – is replaced with woody waste produced during the process of turning hemp into fibre, known as hemp hurds, or shives/shiv. The resulting biocomposite substance is easier to work with than concrete and can be built using shuttering, formed into blocks, or applied as plaster. It’s less brittle than concrete, fireproof, lightweight and insulating and has a good thermal mass, which means it absorbs and stores heat energy. And its acoustic insulating qualities makes it ideal for interior and partition walls. Homes built with hempcrete remain at a pretty constant temperature, warm in winter and cool in summer, with resulting savings in heating costs. Hempcrete also regulates humidity, absorbing moisture when it’s high and releasing it in drier conditions, thus eliminating condensation and inhibiting the growth of mould, bacteria and viruses.

One of the world’s fastest-growing plants, hemp absorbs so much carbon dioxide during its growth that even after taking into account the energy used in production, transport and construction, it’s still carbon-negative.

Hempcrete is popular in France, where it has been used since the 1990s, particularly for repairing old buildings, made of stone or lime, where its breathability is key.

Discovered in 2002 and winning its inventors the Nobel Prize in Physics in 2010, graphene is a single layer of carbon atoms bound in a tight honeycomb lattice. As one of the thinnest yet strongest materials with superlative heat and electricity conduction, it was hailed as a world-changing wonder, although trying to think of potential uses for it initially resulted in a lot of head-scratching.

Graphenstone hit upon the idea of adding it to traditional lime-based paint, which is naturally antibacterial and insect repellent, and absorbs carbon dioxide, which means it purifies the air around it.

Adding graphene fibres gives the paint thermal conductivity, greater toughness, flexibility, strength and uniformity. Used on interior walls, it captures heat and slows its loss through the walls, meaning less heating is needed. Its strength means that less paint is needed for a durable surface. The company says that in a year, three 15-litre buckets of its paint absorb more than 10kg of carbon dioxide, the same as an adult tree, making it the most eco-friendly paint on the market.

The range includes interior and exterior formats in several finishes and over 70 colours.

Made from allophane, a natural mineral obtained from volcanic ash, Ecocarat interior wall tiles are porous, which makes them ‘breathable’. Manufactured by a Japanese company, they absorb harmful substances from the air, such as volatile organic compounds (VOCs) and formaldehyde, which can contribute to sick building syndrome. They also absorb moisture, reducing humidity, which inhibits the spread of mould and allergy-causing mites. In tests, the tiles absorbed up to two litres of water per square metre, in under two hours. They can also reduce household odours from, say, bathrooms, smoking or pets – so effectively that the company advises against use in kitchens for fear of missing out on appetising cooking aromas! Available in a range of sizes, colours and textures, including natural finishes such as limestone, granite and vintage oak.

Cow dung has been a component of adobe bricks for thousands of years, and has fuelled kilns for firing ceramics, but it’s not commonly used to create tableware. As a raw material it’s not in short supply; the dairy cows at Castelbosco, home of Merdacotta, produce 150,000kg of dung a day, also used to power the farm’s operations. Merdacotta (which translates as ‘baked shit’), a fusion of cow dung and Tuscan clay, is the brainchild of Gianantonio Locatelli, the owner-farmer of Castelbosco (who also founded the Museo della Merda, or ‘museum of shit’), and architect Luca Cipelletti, the museum’s designer and creative director. For transformation into Merdacotta the dung is dried and the methane and urea are extracted (along with the smell). It’s mixed with clay, straw and farm waste and fired for a terracotta-like result that’s lighter and more resistant to cold.

Available products include tiles, flowerpots and vases, huge blocky benches, mugs and dishes and, perhaps most appropriately, a replica of a 1920s lavatory, ‘the icon which expresses the cyclical value of the production underlying The Shit Museum’: a receptacle made of the substance it receives.

London-based Mexican designer Fernando Laposse has worked in a community partnership, with the support of the world’s largest seed bank, to reintroduce native corn species and generate income for local people through Totomoxtle production. Additionally, corn breeds previously only planted by indigenous people to honour tradition are being preserved.

To make Totomoxtle (which means ‘corn husk’ in the Mexican indigenous language, Nahuatl) the husks are heated then flattened and glued to fibreboard. Once laser-cut, the pieces can be combined to create effects similar to marquetry or mosaic.

Leather production has many environmental impacts, from deforestation to water pollution and the human cost of tanning hides. For many, including vegans (whose UK numbers quadrupled between 2014 and 2019), leather also brings ethical issues. Standard vegan leather, or ‘pleather’, is made from PVC and polyurethane but happily, there are now several plant-based alternatives.

And they’re not taking food out of people’s mouths, because these cowhide alternatives come from inedible parts that are usually discarded.

Globally, 40,000 tonnes of spiky pineapple leaves are left to rot or burned every year. Set to reduce that total is Piñatex, developed by Dr Carmen Hijosa. Consulting on the leather industry in the Philippines in the 1990s, she was inspired by the use of plant fibres in local traditional weaving techniques, and began to research a new textile for mass production, with positive social and economic benefits, but minimal environmental impact.

After the pineapple harvest, the long fibres from the leaves are mechanically extracted. It takes around 480 leaves, from 16 plants, to produce one square metre of Piñatex. The fibres are washed then sun-dried (or in driers during the rainy season). The resulting fluffy fibre is mixed with a corn-derived thermoplastic polymer, polylactic acid. The non-woven mesh Piñatex base is created, then shipped to Spain or Italy for finishing, when pigments and a resin coating are added to improve strength, durability and water resistance. Breathable, soft and pliable, it’s currently not biodegradable, because its coating is petroleum based.

Dr Hijosa’s company sells Piñatex in five collections of varying weights and colours; the newest, Performance Collection has high abrasion resistance and water repellency and is deemed ideal for upholstery.

Looking like a cartoon stereotype, the prickly pear cactus is valued for its spiny fruit, and the flesh of its young pads, a staple part of the diet in parts of Mexico. Its older pads are also used as biofuel, mixed with cattle dung. But the spiky species now has another use.

Mexicans Adrián López Velarde and Marte Cázarez created award-winning Desserto, which launched last year. The cactus, locally known as nopal (Opuntia is its horticultural name), is extremely drought tolerant and grown without water, absorbing moisture from the atmosphere. The mature leaves are cut, then dried in the sun for three days. Processing and natural dyeing follows, for a result that’s soft yet strong, durable and resistant to abrasion. Produced organically without chemicals, it’s partially biodegradable and plastic-free.

In Kerala, southern India, after the white flesh of the coconut is harvested, excess coconut water is released into the drainage system – unless it’s used to make Malai (cream in Hindi). It’s sterilised, then fermented with a bacterial culture in vats for 12 to 14 days until a sheet of cellulose jelly is formed. After refining, natural gums, fibres and resins are added for flexibility and durability. The vegan biocomposite material is formed into sheets of varying thickness and texture, or moulded into 3D structures, and naturally dyed. It’s then air-dried, softened and made water resistant, without plastics or other synthetics. Malai feels like leather or paper and is biodegradable/compostable and although not untearable, it’s robust enough for furnishing.

And finally, there’s ‘fleather’, an ingenious way to reuse the eight million tonnes of flowers left as offerings at Indian temples and mosques. After the flowers wither and fade they’re dumped into the river Ganges, polluting this sacred waterway. Chennai-based start-up Phool began recycling this floral waste to make incense, vermicompost and biodegradable packaging then decided to try vegan leather and, although it’s not yet in full production, last year it won the company a People for the Ethical Treatment of Animals award.

Adrienne Wyper writes about interiors, gardening the environment and more. You can join her here