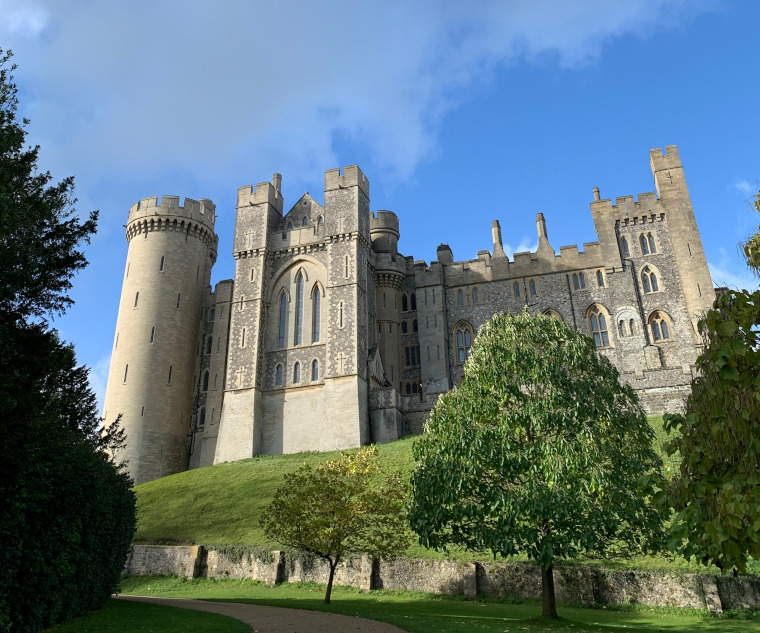 Have you got plans for the Easter weekend? I suggest a day out in the charming West Sussex town of Arundel – antique shops, well preserved architecture and a whopping great castle.

The first thing you notice about Arundel is the castle, it is impossible not to. This compact market town sits on a mound surrounded by attractive meadows and on the peak of the mound is a massive castle. It is so bold and awe inspiring it doesn’t seem quite real  – more like a backdrop for a Hollywood film. You expect knights in shining armour to come barrelling out of the heavy oak gates at any moment.

The thing is, when you dig into the history of the castle a little bit, it turns out it isn’t in fact what it pretends to be. The original medieval castle was established in 1067 following the Norman invasion; you can climb up the ancient keep for an excellent view of the surrounding countryside. But the most dramatic elements of the current castle, including the great towers that dominate the skyline and the crenelated top, are actually Victorian additions. Clearly the castle was not quite imposing enough for the 15th Duke of Norfolk so he pimped the existing building along with adding central heating, electric lights and service lifts.

The castle is still the home of the current Duke and Duchess of Norfolk, they have private rooms in one wing, but much of the Victorian interior is open to visitors. And you can also stroll round the grounds which include a variety of ornamental gardens as well as a kitchen garden that still supplies the castle.

Another fascinating building, in the heart of Arundel, is the impressive Roman Catholic cathedral. Again this looks much older than it is having been built in 1868 by the 15th Duke of Norfolk to a French gothic style.

After a tour of the castle (I recommend paying the entrance fee, it really is fascinating) grab lunch at one of the lovely pubs – The Kings Arms claims to be the oldest in the town. You can then spend a relaxing afternoon meandering round the charming streets which boast a well preserved mix of medieval, Georgian and Victorian architecture.

There is a wealth of independent shops to explore selling antiques, books and artisan produce, plus plenty of quaint tea shops to rest at along the way.

I loved my day out in Arundel, you can explore the whole town in a day, it is comfortable, pretty and a bit eccentric.

The castle and gardens are open from 1 April to 30 October. They are closed on Mondays except bank holidays.

It is a two hour drive from central London to Arundel. We parked in the Mill Road pay and display car park. Or take the train. There are regular direct trains from London Victoria to Arundel, the journey takes one and a half hours and then it is just a 10 minute walk to the castle from the station.