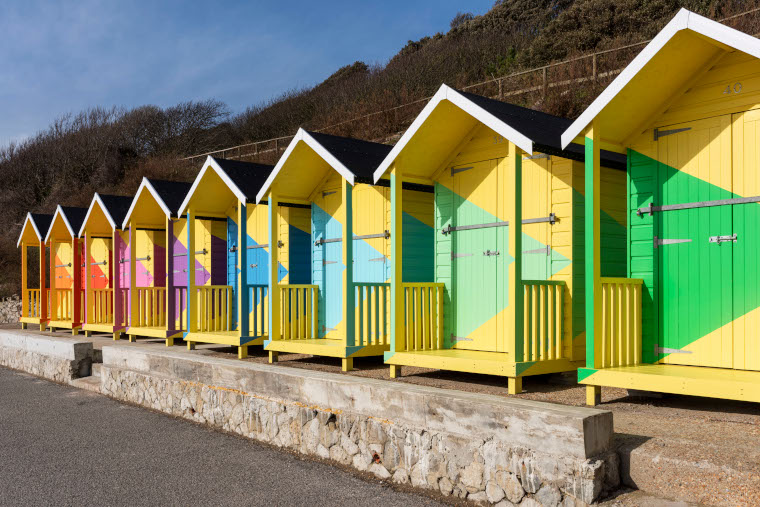 Creative Folkestone Triennial is an exuberant exhibition of public artworks and it’s less than an hour from London. I was impressed, not only by the art, but the whole ethos of the project. If you fancy a day away from your design studio, hop on a train and head to the sea.

Originally a small fishing town, Folkestone became popular with the Victorians both as a holiday destination and, with the development of the harbour, as a cross channel port.

But the town was badly bombed in World War Two which destroyed many of the grand buildings. And then the opening of the Channel Tunnel resulted in the closure of Folkestone’s port and the loss of its main industry.

When I was growing up in Kent, Folkestone was regarded as dreary. You certainly can’t accuse it of being that now. Arts charity Creative Folkestone was established in 2002, dedicated to transforming Folkestone through creative activity.

First, a Creative Quarter was established as an urban village of designers, film makers, musicians and artists. The Quarter now boasts 80 flats, 115 studios and over 50 shops. The ethos of Creative Folkestone is to not just pull tourists into the town, but achieve deeply embedded change, making it a better place to live, work and play for everyone.

That is the history lesson over.

Creative Folkestone launched the Triennial in 2008. The Creative Folkestone Triennial 2021 (postponed from 2020) runs until 2 November. Titled The Plot, it includes 23 newly commissioned public artworks by 25 celebrated artists from across the globe. It is free and is primarily located outdoors. Following its run, some works will remain long term in Folkestone joining 74 other permanent pieces including works by Antony Gormley and Tracey Emin.

There are three routes round the Triennial, each exploring a particular facet of Folkestone’s history. I suggest you make your way from the station to Creative Folkestone Quarterhouse to grab your exhibition guide. This is in the heart of the Creative Quarter where there are places to grab a coffee and you can also use the Quarterhouse loo.

There is much to see, spread over the whole town, it will take you the day to get round it all. Or you can just pick out your favourites. Highlights for me were Rana Begum’s 1054 Arpeggio. A joyous half mile of painted beach huts.

Sam Belinfante’s On The Circulation of Blood is a performance piece and worth the climb up a few steep steps – resulting in a good view of the harbour.

Jacqueline Poncelet’s Looking Ahead is a fascinating piece with kaleidoscopes and bee-eye lenses piercing a Victorian brick wall.

Morag Myerscough’s Flock of Seagulls Bag of Stolen Chips is the result of conversations the artist had with local residents regarding the old gasworks site.

Jacqueline Donachi’s Beautiful Sunday celebrates all the dance floors in Folkestone and had me not only smiling but tapping my feet.

Also, look out for works by Gilbert & George, Mariko Hori’s thoughtful Mellowing the Corners and Jyll Bradley’s Green/Light (For M.R.) inspired by a Kentish hop field.

Trains run direct from London St Pancras to Folkestone and take just under an hour. If you prefer to drive there is a large car park at The Harbour Arm

The best restaurant in Folkestone, which also boasts a charming view of the harbour, is Rocksalt. Or, for something more casual head to The Harbour Arm which has pop up bars and restaurants right by the sea –  some of these are closed on Monday and Tuesday but it is buzzing later in the week.

If you enjoyed this suggestion for a day out. You may also like my guide to the Greenwich Pensinsula sculpture trail