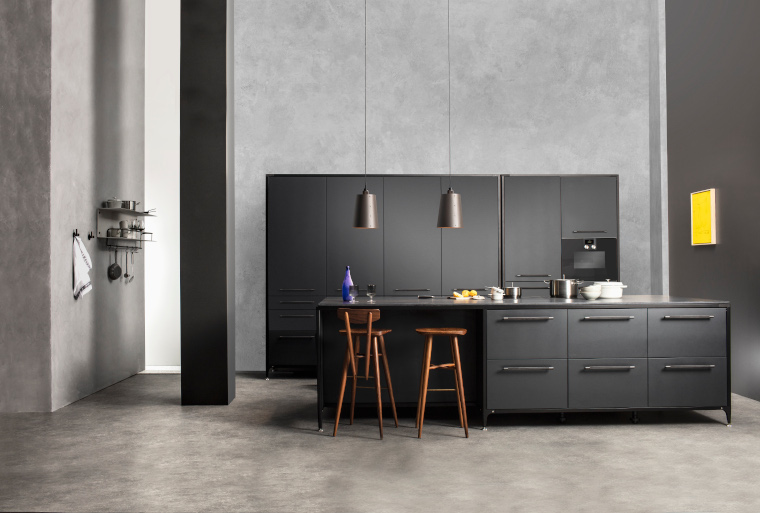 Are you familiar with the Buster+Punch collection of handsome architectural hardware? The company has just launched its first kitchen. A modular, free standing design available exclusively in the UK.

The first kitchen for Buster+Punch comprises two frame options, three cabinet colourways and three worktops, and is, unusually, designed around the brand’s hardware.

Inspired by the professional chef’s free-standing kitchen, Buster + Punch’s founder and creative director, Massimo Buster Minale, called on his background in architecture to strip back the elements of the modular units.

The kitchen units have an edge-to-edge countertop in stone or metal with a corner radius that matches the extruded metal frame. The frame itself has precision cast aluminium legs which rest on brass or stainless-steel adjustable feet, finished with the brand’s signature diamond-cut knurling

Customers will also be able to spec Buster+Punch’s new kitchen mixer tap, kitchen shelving and lighting due to launch at the end of the year.

The freestanding design and modularity of this first kitchen for Buster+Punch, adapt to lifestyle shifts – where you go, it goes.

Massimo says, “We wanted to flip the conventions of kitchen design, using hardware and detailing as the launch pad for the entire process. Developing it in this way is a logical progression for us and our customers. It’s resulted in a kitchen that’s adaptable, usable, and feels like it’s been machined from one solid piece of metal and stone.

“This kitchen feels beyond special. It evokes the same emotional feeling as when I would show a client their finished custom motorbike back in the day. It’s a design that’s linked to every part of our DNA, a complete kitchen look that’s got Buster+Punch’s character and style in every configuration.”