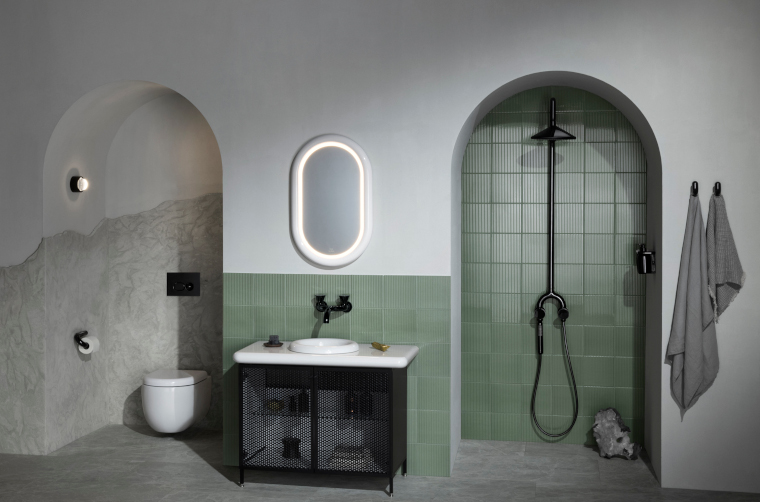 If you find yourself in Farringdon be sure to pop into the new VitrA showroom, it’s a pleasing space anyway, but now it is even more interesting as the new Tom Dixon collaboration is on display.

Liquid is Tom’s first venture into bathroom design and the result is a comprehensive collection which covers sanitaryware, furniture, taps, showers and tiles which work together or as stand-alone pieces.

Although contemporary, there is a very British feel to the VitrA Tom Dixon collaboration and Tom says that part of his inspiration was Victorian bathrooms.  “I like the feeling of permanence in Victorian bathrooms, with their big, chunky taps and fat tubes. It’s an aesthetic that’s closely connected to a whole tradition of British engineering and influenced the development of the bathroom.”

Like much of Tom’s recent work, the new collection is aligned with his increasing use of round-edged aesthetics.  As well as the Victorian influence, the designs have been inspired by elements of pop art – such as Jeff Koons’ BalloonDog and the sculptor Barbara Hepworth’s geometry of soft forms and use of rounded marble.

While the overall design is stripped back and reduced, a style Tom refers to as ‘expressive minimalism’, the functionality is intuitive so that users can instinctively understand how to operate the products. “I wanted the collection to look like a kid’s sketch of a bathroom basin or a tap,” says Tom, “displaying a clear logic and simplicity in looks and usage.”

Tom worked closely with VitrA’s in house design team to create Liquid. Consciously choosing to offer only white ceramics, the range combines different materials including fluted glass and metal mesh. Taps and showers are available in chrome or a new gloss black finish.

Liquid also includes wall tiles, available in five designs and with colour options of white, black, grey, sage green and ecru. The tile designs reflect ripples in the water and patterns inspired by the classic U-bend and can be creatively configured.