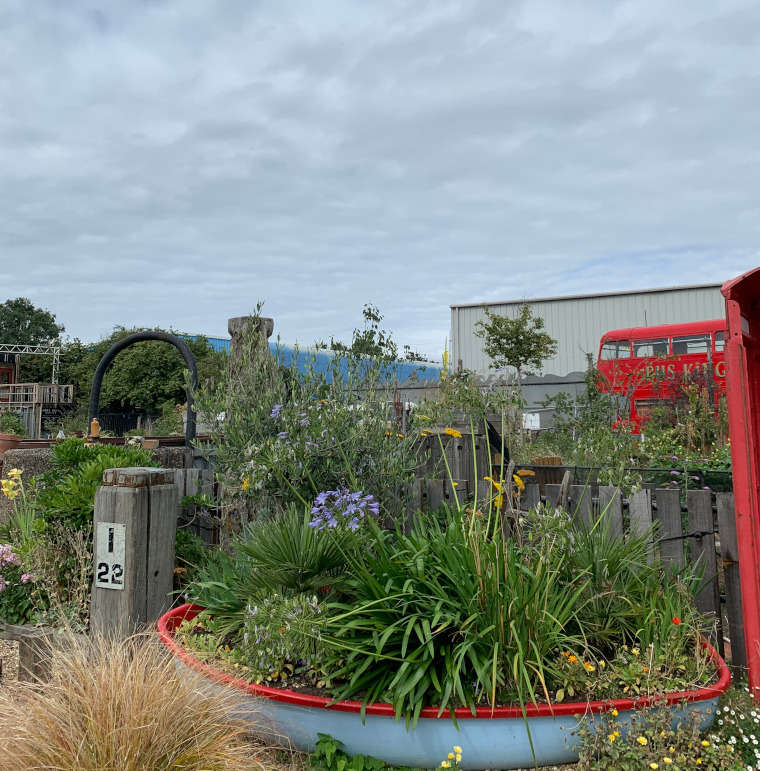 Occasionally I highlight days out that I think you will enjoy. My latest suggestion is public art walk The Line in East London – a surprisingly lovely meander next to the River Lea with some thought provoking artworks thrown in.

This walk starts in the Queen Elizabeth Olympic Park with Anish Kapoor’s Arcelormittal Orbit. You can take the lift to the top of this tangled tower for views of East London and then choose how you descend – either in the lift or via the Slide. Brace yourself, it’s the tallest and longest tunnel slide in the world apparently (you will need to book the Slide in advance).

After this, it’s time to slow down the pace a bit as you head off along The Line art walk. The majority of this path is next to The River Lea and it is well sign posted – just follow the pink and blue stripes on lamp posts.

One legacy of the 2012 London Olympics has been various projects to improve the Lea Valley waterways for both people and nature. You can now walk all the way from the Olympic Park to Cody Dock, it takes about two hours depending on how long you linger at each exhibit.

Next on the trail is a series of black and white ink drawings by Madge Gill, part of her Nature in Mind series celebrating the inspiration she found from natural surroundings.

Further along, you won’t miss Reaching Out by Thomas J Price, this outsized bronze of a young woman on a mobile phone explores the theme of isolation and connectedness.  She’s a striking sculpture, I only came up to her thigh.

The path then takes you through Three Mills, a collection of picturesque historic buildings that wouldn’t look out of place in rural Suffolk, such a surprise to find them so close to West Ham. My favourite art installation is also here, A Moment Without You, by Tracey Emin. The piece comprises five bronze birds on top of high poles. The diminutive, life-sized forms serve as symbols of hope and spirituality. Emin says, “I’ve always had the idea that birds are angels of this earth and that they represent freedom.”

From Three Mills continue next to the river past Bow Locks, eventually reaching Cody Dock a quirky community garden where you can grab a cup of tea and an excellent homemade flapjack. In total there are 12 artworks to spot along the route and the whole walk is surprisingly quiet and peaceful considering how close you are to bustling areas of East London. I found it a delightful escape and the folk I met along the way all seemed equally enchanted.

Some background to The Line

The River Lea originates in the Chiltern Hills, Bedfordshire then flows south through Hertfordshire, along the Essex border and into London where it meets the Thames at Bow Creek.

The Line is London’s first public art walk, running from the Queen Elizabeth Olympic Park to North Greenwich. It is called The Line after the Greenwich Meridian which it crosses and re-crosses at various points. You can download a useful map here

I started at Stratford station, served by the DLR and Jubilee line. The walk finishes at Star Lane station where you can jump on the DLR to go home or to take you to Royal Victoria Dock and Greenwich Peninsula where The Line art walk continues. I have written about this as a separate walk as I thought it easier to complete The Line in two easy chunks.  You can find my Greenwich Peninsula day out here.